Home » Can I Swap a Chevy ZZ4 Engine from a Truck Over to My Boat?

When you own or operate a boat for long enough, you’ll eventually need to repower the vessel. The engine needs significant repairs, requires a rebuild, or just needs a complete replacement.

If you decide that replacing the old engine with a new one is your best choice, some owners discover the hard way that there is more to it than changing the sterndrive or finding a better inboard.

Before you start this process, it is often ideal to see if the job is worth the cost. Your boat’s market value rarely increases enough to justify the expense of repowering. Unless the current engine is toast, repairing the old one or using a rebuilt is the better option.

When you have a spare Chevy ZZ4 engine lying around, you might be able to use it in your boat.

Can I Swap a Chevy ZZ4 Engine from a Truck Over to My Boat?

If the bell housing bolt pattern matches and the crankshaft flywheel mounting is equal, you can swap a Chevy ZZ4 engine from a truck over to your boat. If it isn’t the same, you’ll need a new coupler and flywheel to match. Then it would be best if you got marine gaskets, brass plugs, and other water-based equipment swaps.

Although marinized engines rarely wear out, especially within their first decade of use, there can be issues that cause a failure to occur. The most common causes tend to involve poor maintenance habits or a component defect.

It takes a long time for wear and tear on a boat engine to cause its failure.

Unless you can determine the cause of the problem, you could be wasting more money than you’re saving by swapping a Chevy ZZ4 engine in there for the old one. By testing each component before the repair, you can see if there might be a simple fix that can get you on the water again.

When your goal is to repower or add power to your vessel, it can make sense to trade one engine for the other.

Once you’ve decided that a new engine makes the most sense, you’ll want to follow these steps to get ready for the sequence.

What Is a Chevy ZZ4 Engine?

When using the Chevy ZZ4 in a muscle car, street rod, or truck, it delivers 355 horsepower and 405 pound-feet of torque. The engine has a 10:1 compression ratio, a D-shaped exhaust, and 112-degree lobe separation. Even the stamped steel black OE valve covers speak of the quality you can expect when using it.

Since you’ll likely push your compression ratio up from 9.4:1 or lower when installing it in a boat, you’ll need to think about your fuel quality once the engine gets installed.

GM recommends using the Chevy ZZ4 engine for your low 12-second bracket vehicle, increased horsepower for a Friday cruise, or a vintage Chevrolet that needs an updated “heart.” Its best use is for a stock small block Chevy vehicle.

It is essential to note that the ZZ4 engine is current in discontinued status with General Motors. Some of the parts are not legal for use in California because of the emissions laws and regulations.

◼️ Where Can I Purchase a Chevy ZZ4 Engine?

Since GM discontinued the ZZ4 350, you’ll need to shop the secondhand market to get one for your boat if you don’t already have it in your truck.

Although the engine has legendary status within the Chevy community because of its reliability and performance levels, some challenges exist when installing it on your boat.

You’ll notice that the manifolds are made from aluminum, which is why the ZZ4 is listed as not being designed or intended for marine use. If you modify it so that you can run it in the boat, any warranty that still exists for the unit would be immediately void.

That means if you install the ZZ4 and something goes wrong with it, you’re on the hook for paying for whatever repair is necessary.

If you don’t have a Chevy ZZ4 engine to use at home for your boat, buying one on the secondhand market will typically cost more than $4,000 with shipping charges.

Most websites sell this engine for around $4,500. It ships by freight, which means additional shipping charges apply.

You can also increase that cost by putting multiple freight items in the same order.

Once you have the engine, you’ll need to make a few modifications to help it become marine-ready for your boat.

Once you think about those costs, you’re already above $6,500 for the engine. That cost doesn’t include any balancing or managing the exhaust from the silencer in the back.

When you get into that price range, you’re paying significantly more for the new engine in your boat than you would with a Stroker 383. That’s another hot rod engine from Chevy that uses a modified crankshaft from the 400 to increase displacement.

What Are the Startup and Break-in Procedures for a ZZ4?

If you’ve decided to swap the ZZ4 engine out of your truck and into your boat, you’ll still need to follow the startup and break-in procedures. It is always best to treat the installation as if it were a new engine, even if you’ve put on some miles driving with it already.

Here are the steps to follow so that you’re getting the best possible outcome with this investment.

Synthetic oil is not recommended for the Chevy ZZ4 engine until after the second recommended oil change after you’ve made the swap into the boat. If you expect to encounter colder weather, it might be necessary to obtain a lower viscosity product to ensure the operations work as intended.

Should I Swap a Chevy ZZ4 Engine from a Truck Over to My Boat?

The Chevy ZZ4 350 small-block engine is a turn-key crate engine and one of GM’s most popular designs since it was first introduced. It comes packed with hypereutectic pistons, a forged steel crankshaft, aluminum cylinder heads, and a hydraulic roller camshaft with lifters.

If you have a powerboat with an inboard engine that requires replacement, it might make sense to swap a ZZ4 in there if it is compatible. Although that means you’ll lose vehicle functionality, the V8 can deliver a reasonable performance for a vessel.

It might be better to look for a remanufactured ZZ4 since the cost could be up to 50% less than what you’d pay for a gently used one on the secondhand market.

Since the cost of a new inboard engine with 250 HP can be up to $30,000, the horsepower profile from the Chevy ZZ4 can give your motorboat some get up and go. 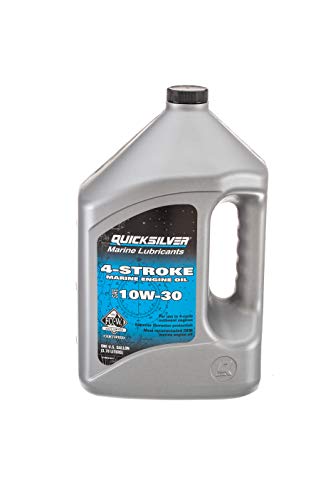 Quicksilver 4-Stroke Marine Engine Oil Get it on Amazon

If you need to get oil for the engine, I highly recommend using Quicksilver 4-Stroke Marine Engine Oil. It delivers the recommended 10w30 viscosity while reducing friction risks immediately.

The ZZ4 swap doesn’t make sense in every situation. You’ll want to speak with your local shop if you have additional questions about this process.